Padmalakshmi sits there in the interrogation room, facing the famous detective Kondaswamy. she adjusts her saree’s pallu strategically enough to let some cleavage slip out. The table fan to Padmalakshmi’s right gorges on anything remotely cool in the room like a bulimic, only to throw it up in hot, stifling blasts that barely touch the sweat streaming down Padmalakshmi’s ample sideburns.

“Madame”, Detective Kondaswamy says, as his eyes stare not into Padmalakshmi’s big black, kohl smeared one, but right at her heaving chest. “So, you say that you were taking a bath when you heard a commotion and came running down to discover his body?”

“Yes Sir.” she sniffles for effect and he hands her a murky handkerchief from his pocket. “Have you found out who did it? Who mercilessly bashed my dear Balasubramaniam’s head like a pulp?”

“Madame Padmalakshmi” Kondaswamy says, unbuttoning his first two buttons, shaking his collar and gulping down the lukewarm cola in front of him.

“We have sent your husband’s body for autopsy. Until then please answer my questions.”

“Sir… my husband is dead.” As if on cue, Padmalakshmi’s eyes water and rivulets run down her cheeks mingling with salty sweat. “What will I do? How will I eat? How will I survive?”

Kondaswamy shakes his head and continues. “Madame please, who else was in the house except you?”

Through tears Padmalakshmi pulls up her pallu, that was on the verge of threatening to expose more cleavage, and says, “That wretched Mahalakshmi. She was there in the house when it happened.” 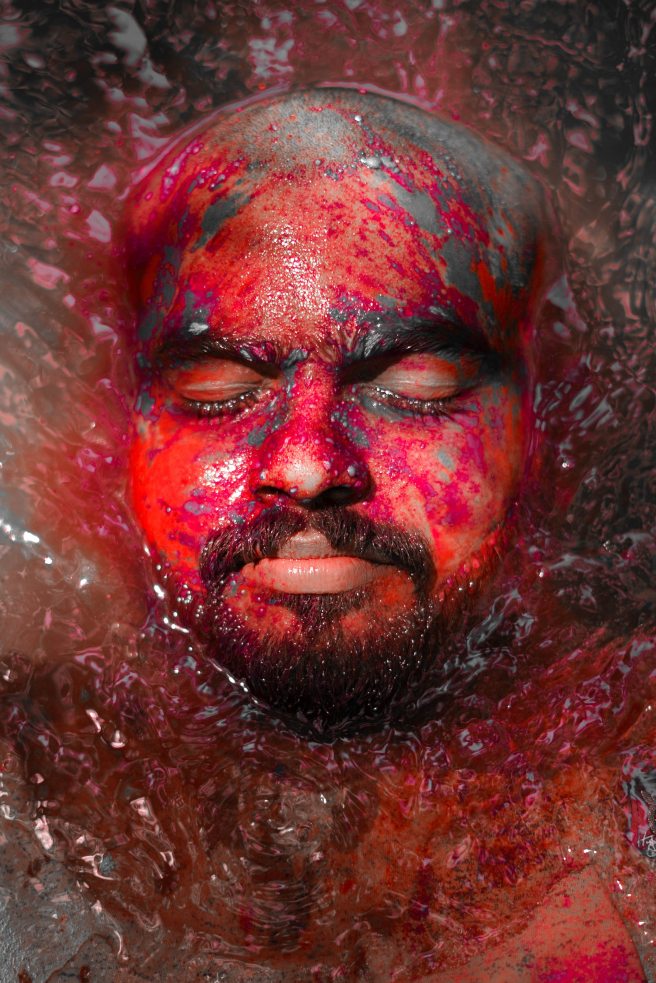 Kondaswamy mutters in disgust, as if disappointed at the game of tease that Padmalakshmi’s pallu has been playing with him. He brings his diary out and writes Mahalakshmi in capital letters. “Do you know of any enemies that Balasubramanium had? Anyone who wanted to hurt him?

“Oh sir” Padmalakshmi sprawls her torso on the table and this time her pallu finally falls off to reveal her sweaty breasts trapped between her and the unvarnished surface of old teakwood.

“My Bala was an angry man, yes. A devout Brahmin, yes. A strict disciplinarian, absolutely. But was he was a bad man, no. He was a generous husband and everything he asked me to do was for my own good, Sir.”

Kondaswamy licked his lips staring into the vast expanse of Padmalakshmi’s breasts. “Madame please answer my question. Do you know of anyone who might have wanted to kill him?

“Aiyyoo Sir…it can only be one person. Mahalakshmi, Balasubramaniam’s wife; first wife. She cursed my poor Bala when he married me. It is she, that witch who killed my love!”

Padmalakshmi wails; her tears scattering the termites traveling in a single file on the table.

Kondaswamy furiously scribbles on his notepad his eyes still glued to her chest.

With the windows open, this room is brighter than Padmalakshmi’s room, yet quieter. There are no sniffles, no sobs. Only silence as the two women stare at each other.

Shaiba looks away first. Mahalakshmi smirks. Her hair had not greyed in subservience to Balasubramaniam. Just like Jayalalithaa had been the unrequited queen of AIADMK, Mahalakshmi ruled the Balasubramaniam household with an iron thumb.

“Madame…” Shaiba breaks the silence as she fans her face with a thin notebook.

“Where were you when your husband died?”

“Like I told the other inspector,” Mahalakshmi picks a piece of morning ‘s semiya from her tooth, and then twists it around between her thumb and forefinger. After sufficiently satisfied, she pops it back into her mouth, and chews lightly. “Like I told the inspector who looks like he eats two chicken biriyanis for breakfast, I was in my room getting my legs massaged.”

Shaiba bends her face over to her right, and wipes the dripping sweat with her khaki uniform. She stares at the fan behind Mahalakshmi and wishes it would move faster. Even blasts of hot air was better than this stifling humidity.

“Balasubramaniam was my husband…” Mahalakshmi continues, “…the only bread winner. Chinna, if you cannot find his killer, than please don’t waste my time. It is almost two o’clock and lunch needs to be prepared.”

“It is not Chinna, Madame, it is inspector Azim for you.” Shaiba says, visibly annoyed.

“Chinna, I have seen you run around in torn chaddis in our neighbourhood. You poor child were so frail, I used to sneak payasam out and feed you. Keeping you hidden from Bala. You know right, according to Bala, no Muslim can ever eat from our Brahmin vessels.”

“Okay…” Shaiba says. “Was there anyone else in the house? Apart from you and Bala uncle.”

“Chinna…” Mahalakshmi says, just as Shaiba shakes her head, conceding defeat. “Who do you think was massaging my feet?”

“Who else will it be? Of course it was that characterless Varalakshmi. Our servant and Bala’s concubine.”

Shaiba debates whether she should stop fanning herself with her notepad and make a note of this, or not. Eventually she decides to continue fanning herself and offers Mahalakshmi a warm cola.

Varalakshmi looks around the barely furnished room. She is mumbling a prayer to Anjenya Swamy. She is also tapping her bare feet.

“Saar…” she says, looking at the clean shaven officer sitting in front of her. “When can I leave, Saar?’

Sharma gulps down the cool cola in one sip and Varalakshmi swallows a dry gulp.

“Answer a few questions first.” Sharma says, not even bothering to look at Varalakshmi.

He hated Kondaswamy for landing him with this middle-aged servant. He would’ve preferred interrogating Padmalakshmi, in spite of her manly face; her breasts were a sight for sore eyes.

“Where were you when you heard the screams from Balasubramaniam?” he asks, as takes out a crisp white handkerchief and wipes his brow.

“I was in Madame’s room, massaging her legs. She has arthritis you know. So every morning I rub her legs with Kummadi tailam for half an hour, because…”

“Were you the first one to see the body?” Sharma spits the next question, before Varalakshmi finishes the sentence.

“Yes, Saar. Madame takes time to climb down the steps. But I ran. You see, Master is very strict if you don’t come when he screams.”

“But these weren’t screams of him calling you?” Sharma says, scribbling on his notepad.

“No sir. These were screams of pain.”

“Describe what you saw.” Sharma says, still staying intently staring into his notepad. Varalakshmi looks at the table, her nail systematically crushing one termite after another.

“Saar, his head was crushed in. There was so much blood and he was lying face down in it. So much blood. There were also pieces of flesh and tissue that should be inside his skull, but it was outside, splattered against the wall and on the carpet. There were white pieces of bone, sticking from the tissues. I almost threw up the semiya I ate for breakfast, but I controlled myself. Madame would have sent me to bed without dinner if I had ruined the carpet.”

“But the carpet was already…” Sharma looks up to stare at Varalakshmi, he then decides to shake his head and continue with the interrogation. “Who came after you?”

Not looking at Sharma, intent on eradicating the termites, Varalakshmi says, “Saar it was Padmalakshmi, Master’s second wife. The shameless woman came running only in her towel, and when she saw Master, her towel fell off. I don’t know what was more shocking, to see that slut’s naked body or to see master lying down with his head bashed in.”

Sharma cursed himself for not insisting of having Padmalakshmi for interrogation.

An hour later, in the common room Kondaswamy, Shaiba and Sharma compare notes. They sit around a table, their heads bent towards each other, whispering.

“Everything checks out.” Kondaswamy says. “Their stories match.”

“Yes Sir.” Sharma says. “Even though the door was locked from inside, what is stopping the murderer to jump out of a window and then scale the garden fence.”

“We know that Balasubramaniam was killed by a heavy iron rod…” Shaiba says. “Don’t you think it is physically impossible to jump a six foot fence carrying an iron rod? It must weigh 20 kilos easily”

“Oh Shaiba…” Kondaswamy shakes his head, like patiently explaining to a five year old, why Earth is not flat. “We men lift hundred kilos in gym everyday. What’s an iron rod?” Shaiba stares at his massive bulging tummy. It does look like he ate two chicken biriyanis for breakfast, she thinks.

“No but seriously, something is fishy.” Shaiba says.

“What if one of the women killed him?” she persists.

“Ha… no woman can lift such a heavy rod, and blow enough number of times to bash a skull in.” Sharma laughs loud, as Kondaswamy shushes him, giggling himself.

“But…but what if all three conspired? All three could’ve taken turns.” Shaiba continues.

At the same time, outside the police station Mahalakshmi hails a green auto, and three ladies file into the auto, silent, smiling and holding hands.

2 thoughts on “Who killed Balasubramanium?”