The spotlight zoned in on my mother, after all she was Hera, wife of Zeus. And it wasn’t like mom wasn’t used to the spot light.

She stood there, a Cosmopolitan, swirling seductively in her dainty hands, nonchalantly laughing at a joke she devised out of her clever, witty little head. Her posse of similarly dressed friends, yet not as grand as my mother; laughed in sputters. Unsure whether it was a joke, and what was it that even made it funny.

I laughed loud, snorted, pretended to choke on my own bile and back slapped my mother garishly, in affectation of support at her pointless humour.

“Eris, what un-lady like behaviour is this?” She smiled sweetly at me. A smile that did not reach her eyes and promised threats of cutting me off my pocket money. 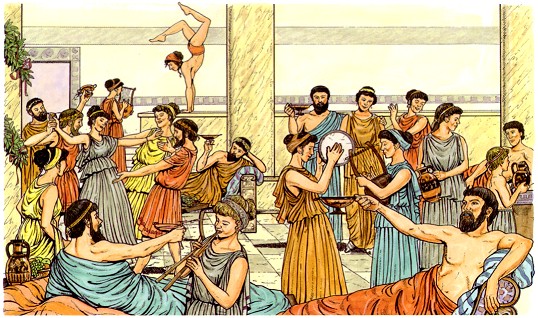 “What happened to them?” Mother said; her eyes going wide and a manic grin lining her botoxed cheeks. It was the hint of gossip, whisper of a scandal, a chance to bitch that always got my mother looking orgasmic. I wondered if that was what dad used to seduce her too. Gossip.

“Well they were caught, caught in bed, by their own mother.” One among the posse spoke in a loud whisper. Whisper, because it was meant to be a secret and loud because, she didn’t care, it was someone else’s secret.

She continued, after an appropriate pause to let the horror of this event sink in.

“And guess what, Isis was in spandex bending over and Osiris was spanking her while Rihanna sang ‘ sticks and stones may break my bones, but chains and whips excite me'”. She actually sang the Rihanna rendition, pretending to use her LIIT as a mike.

I smiled, curbed the urge to burst out in a raucous laughter, when I saw my mother’s horrified expression.

“This is horrendous, an abomination, a sacrilege. It goes against all human values and beliefs. Just the mention of the word incest is a blasphemy.” She spoke every single word with enough emphasis to ensure that her chest heaved harder and bits of her perfect silicon breasts spilled out of her cleavage cut silk gown.

“But mumma,” here I felt the need to interject. You see, just by the admission of hating incest my mother was making a fool of herself.

“Not now, Eris.” She reprimanded, without even giving me a look. With just a finger, always ‘the finger’.

Anger flared inside, I wasn’t a child anymore, ‘the finger’ was completely unnecessary. And that was why I dared to defy ‘the finger’ and continued.

My words trailed off, as she put ‘the finger’ on my chest and stared me down. I say stared me down, because even though I was a good five inches taller than her, she could still make me feel like a toddler.

“Me and your Papa are different, Eris.” She spoke finally, after what felt like an hour of staring me down. “We had no choice, with your grandfather threatening to dissolve our empire.”

I snorted. Heard that one a million times.

“Oh did you hear about Persephone?” spoke another one of her acolytes. I mean, of course she couldn’t be left behind, now could she? She had to get into Hera’s good books too.

“What about Persephone?” Mother asked. A sour taste in her mouth, since she hated Demeter, Persephone’s mother. And why wouldn’t she? Demeter and my dad were rumoured to have had a rollicking little fling.

“Well, you would want to know this Hera.” The posse spoke, mischief in their eyes, swirling their drinks like marionettes on strings.

“What?” Hera asked, still unsure about the potential of this rumour being anything other than an anti-climax.

“Well well well…. She has run away with Hades. She has disappeared and Demeter is going mad trying to find her daughter.”

The last words were spoken with the finality of knowledge that this was definitely not an anti climax. In fact it was even more climatic than the best climax my mother would’ve have had in her lifetime.

“Oooohhhhh” my mother’s mouth stayed open for an entire minute, and I finally got bored enough to count all her fillings.

“How could she? How could Persephone run away with that filth? That drug addict, waste of this family. We don’t even know where he stays. There are rumours that he stays in the sewers!” My mother exclaimed, horror in her eyes. Sewers were of course akin to the 9th realm of hell, for my mother and her posse.

She looked like she wanted to say more, but her mouth moved in animated “ummm” “ummm” of someone desperately hunting for more words.

Her posse agreed in solemn murmurs about how young girls were stupid and what would Persephone end up as?

“But… But…. Mom?” I spoke again. Clearly I was a slow learner and hell bent on giving up my pocket money. “Didn’t Persephone tell you the other day that she liked Hades… And you told her to go follow her dreams?”

“Eris, shut up.” Hera stared at me again. I mean, she never got tired of it, of that war of staring me down with ‘the finger’.

“You don’t know what you are talking about? Now go find yourself a suitable rich boy to court.” She tried to shoo me away. And as I walked off, I heard her telling her posse

“She may be a blabber mouth, my daughter, but thank God she is straight. Not into all that lesbian stuff like Artemis.”

Her posse sighed in relief with ‘I know’ while my roving eyes searched out for Artemis and I licked my lips at the sight of her round firm ass.

One thought on “A cocktail dinner at Mt. Olympus”