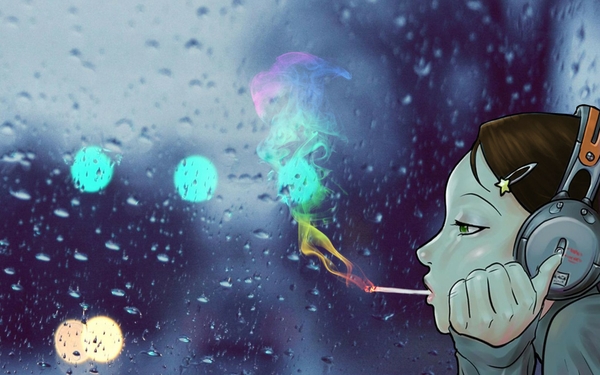 His fingers tapped on his wrist-watch. He raked a hand through his wet hair and she caught the faintest whiff of sweat. ‘You stay nearby?’ he asked. Why would he ask that? Of course he knew. Although he hadn’t been home, they’d spoken about it occasionally. She’d mentioned how she walked to work and he’d joked how well that had been working for her. When he’d say something like that, she’d kick at his feet, or if no one was around, blow smoke on his face until he backed off, something she couldn’t imagine doing back in college when they were friends, good friends. She regarded him only briefly as he looked away outside the café at the rain and the people scurrying around to take shelter under heavy trees, holding his hesitance. A surge of chill, unaccounted by the cold howling wind, roused her body and she gripped his hand and stepped into the rain.

Twenty minutes later, they were home. He was still outside, taking off his wet socks when, in the bedroom, she changed into dry clothes. When she had met him, at the supermarket, maybe three months ago, she hadn’t considered the possibility of having him home. He was examining a packet of chips and she couldn’t, for one godforsaken minute, be sure it was him. She was at once both glad to have Vinu tugging her away from him towards the ‘Toys’ aisle and sad, vaguely and passively, for the general circumstances – for her shopping cart loaded with toiletries and groceries, for Vinu and his innocent face, for the cash registers and the antiseptic air they all breathed. He’d glanced at her for barely a moment and almost shouted, ‘Gucchoo’ before earnestly half-hugging andshaking her hand and giving a one-sided high-five to Vinu.

He was in the living room when she came out with a towel for him. He gestured to ask if he could smoke in here. No, she said.

She heard the flush of toilet. She slumped on the sofa; her body feeling warm, heavy and doughy. She felt a seething urge to smoke but she lay there with her toes pressing against the edge of the red floor carpet that slowly arched upwards. When had she seen him last? She definitely didn’t meet him on the last day of college, she was too heartbroken then. Had she gone out with them to the beach, ‘one last time’ – or had they gone out again anyway after that for another ‘one last time’? She remembered a night in the cottage by the sea, a clear warm night, when they were all high as fuck. She had watched him for what felt like an eternal sunset and then she had crawled towards him, and dug her teeth into his neck; they’d all laughed and then he’d laughed, he couldn’t stop laughing, and then she’d crawled back to a corner, where she’d sobbed, and then somebody else had sobbed, and it had felt like a tragic end to an era that hadn’t even begun.

He emerged out of the bathroom – his hair tousled and shirt untucked. She smiled and he noticed but hurried over to his bag, muttering, ‘I hate this job, I so hate this job.’

‘Late, again?’ she asked, pulling a pillow towards her. He laughed a tight-lipped smile, his face giving away nothing at all. For he knew nothing, didn’t he? Did she ever tell him about it? That night, in the cottage, did she? He had grown from the boy he once used to be, from the boy who’d always come late to class, shirt barely tucked in, hair windblown and eyes ablaze with the warmth of a cloudless sky. She’d nicknamed him L8 CMMR, a nickname she didn’t recall disclosing to anyone except perhaps to students she wouldn’t know or meet who’d find it passionately etched on the last desk of lecture theatre 20B for at least few years to come. What was she thinking? He played football and you could tell, just by looking at him, that he played something, in the scorching sun. He’d the jaws and the shoulders of an athlete and earthen hands that she’d often imagine wiping the sweat off his forehead or lifting his t-shirt ever so slightly to cool his chest. She was the kind who’d be easily befriended and that was all they ever had. Now, he’d been tamed into a corporate slave, a man who’d soon sport a paunch – she couldn’t bear the thought of it. But she had, in fact, spoken about it to him, and it had stirred them both. He’d mentioned, casually, that she’d changed, had he?

He was done with the meeting sooner than she’d imagined he would and for the first time since she’d arrived home, she heard the ticking of the clock. She presumed that it’d stopped raining but soon realized that the rain had only worsened.

She looked around, as if she’d only just been introduced to her home, the family photographs and everything.

After he’d left, when the rain had diminished to an occasional light drizzle, when Vinu had fallen asleep and her husband sat on the sofa watching news, she sneaked out for a smoke. She took the elevator up the balcony on the twentieth floor, which surprisingly no one visited, climbed a ladder that led to a water-tank and snuggled in a niche there that smelt of moisture and rotten leaves, and maybe pigeon shit, and exhaled.