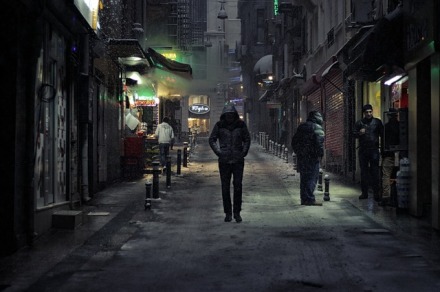 The street is busier and darker than usual; vendors, pub-hoppers, bikers, prostitutes are bustling from every corner­­­, like rats in a dungeon. But he appears to pay no heed and when he does, they don’t ruffle him at all. He hasn’t removed his shades. Not in days or perhaps weeks or months. His eyes are billowy, and his vision is clouded, under those night shades, with those heartaches. He sees no future, or past for that matter. It’s the present, if at all he can accept the way it is, that bothers him.

He touches his pocket again. The packet is still there. It of course is. Paranoia and an itch on the bridge of his nose by the sweaty rims of his shades are agitating him.

The vendor from the corner shop taps his shoulder and gestures him to move. He has been standing there for a while, not moving at all, like that pole he is standing next to; he is perhaps obstructing the way for potential customers.

He moves, his legs move, his body too, except not in rhythm with his legs, to the next vile place.

The waiter pops open a beer bottle. The froth effervescence tickles his mind. The harder he stares at it, the more it titillates him. He smiles. A crazy, crooked, uneven smile. Brings the beer bottle close to his eyes and peeks.  He is in the moment. Maybe a loser by all means, but he likes it.

His eyes are glued to the TV at the bar. The Nascars on swirly tracks are making him giddier and pukish. The before taste of puky liquid rinses his tongue. He looks away from the screen, and then looks back. The pixels on the screen turn frosty and nebulous when he squints. He does it once, twice, thrice, till it bores him.

His lips are shaky, like his plans for the night or his future. He pisses in the cup sized, urinal attached to the wall, almost as if, he is collecting the sample for a drug test. The monster drawn on the wall, stares at his junk. It looks like an undefined gothic creature at first and then a strange possessed black cat. He touches its nose, before he wiggles off heedlessly and a few drops still wet his underwear.

He splashes his face with handful of water. The water doesn’t cleanse his eyes; he is still wearing shades. He barely remembers things, names or events. In his mind, it’s not been that long. But it’s been a good six-month.

He touches his pocket again; the third time or the fourth time. He has lost count, but not his packet.

His eye bags are pink (unlike his health) about to turn crimson, more like a mix of purple and crimson. Through them, he disappointingly looks at strangers, who spread love and couples who fight, people who display affection in public and people who can’t.

He holds the neck of his beer bottle. It’s his fifth or sixth bottle for the night. This time, his grip is loose, like the belt around his unbuttoned jeans. His leg, he is not sure which one of the two, has a cramp. She would call it a Charlie horse, but he thought Pins and Needles was an amateur, but a better suited meaningful terminology for it. It is spreading, upward, all the way up to his hands; he feels one arm less. He drops his bottle hastily, and picks it up, gently, clicking the other bottle necks, making a toast sound.

He takes a walk, a little too far, a little too directionless path away from his somber home, that it has become lately or over six-months. It’s a good walk, for almost two miles and a half, and with alcohol, almost three. He wants to get in a public transport. But they won’t take him. He smells of sweat and drugs.

Once he crosses residential blocks, the stray dogs start to chase him and bark at his unsolicited presence in their territory. He stops, walks and stops. “Don’t be scared, just keep walking. They are dogs, not dinosaurs”, she would joke. He walks some more, the dogs are left behind. They don’t bother him anymore, no one does.

It’s two in the night. No one comes to the park at this hour. Not on a Monday. He feels the bulge of his pocket again and pulls out the handkerchief; it smells of her, still.

Let’s sit there, she would say, pointing at the corner bench, that’s where no one can see us.

For a while, he sits there, clutching his handkerchief.

Can we lie down for a while and just look at the sky, she would say, and once in a blue moon he would agree without being annoyed.

He lies down, and through his shades, he sees the sky full of stars, some of which, shine brighter than the other (as if they are talking to him) and one of which, is probably her.