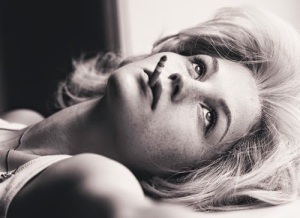 I laboured myself off my bed, it took exactly ten minutes for me to lift my legs and place them on the ground beneath. Parts of my body, I never knew existed, had been aching in pain and anger since five years now. I trudged to the mirror to take in my sunken eyes, chapped hollow cheeks and smoke stained teeth.
Last night’s binge drinking and smoking pot was not helping me in any way. For that matter so wasn’t the night before, or the night before that.
I loved my routine, the routine that involved replacing food with alcohol and water with weed. It allowed me to pass out night after night; in a drunken stupor. Just what the doctor advised.

Looking back at the mirror; I struggled between the decision to just brush my teeth or to take a full-fledged bath. A part of me screamed, ‘Laura, this is day three of not wanting a bath. Aren’t you the disgusting one?’, but then I decided to throw that part, the voice of my conscience, in the “I don’t give a fuck” bucket.

After quickly splashed water on my face, I gargled and tied my messy hair in an even messier bun. Honestly, who was even going to look at me, with my sunken eyes and aged face?

Once I discovered that my almost empty fridge held, only a fungus-infested sandwich, I realised, it was time to make that trip. The trip I dreaded, because it actually involved looking into people’s eyes and talking to them, even if it meant asking them to bill groceries.
Did I mention before, I have hated the existence of mankind since five years now?

As I walked out into the sunny morning, with people strolling around me, laughing, children running and playing, I lifted my hands to ensure I did not stink of body odour. Guess what, I did. And then ensued another struggle to go back and splash on some deodorant, until I decided to throw the deodorant into the “I don’t give a fuck” bucket.

I loved that bucket, it made my struggles with myself easier.

As I walked down the street, I couldn’t help but think of a similar street I used to live in, not too long from now, along with my five year old daughter, Rhea.

Rhea, with the voice of an angel and the curiosity of a cat.

Rhea, who disappeared right from our front yard.

Rhea, whose blood stained shoes and clothes were found in a sewage with no body around.

My dry eyes, no more threatened to fill with tears. I had cried enough for five years, now even my tears lay in the “I don’t give a fuck” bucket. I knew I was a failure as a mother. Mother’s were supposed to protect their young ones, like a lioness, fierce in roar and unyielding in their attack. But I had always been a disappointment to myself, especially when I lost my only child to my neighbour.
You see, I knew who had kidnapped my daughter and yet I could do nothing. My tall bald neighbour, with broad shoulders, a mean scar on his right brow and a long beard, whose basement I had once peeked in and found hundreds of photographs of young girls, had disappeared without a trace the week after I lost Rhea.

There wasn’t enough evidence against our neighbour Sam Wallace, you see. And when I did gather my wits enough to go about collecting evidence to somehow make him a primary suspect, Wallace was long gone.

Now as I walked, or rather dragged my drug abused and aching body across the road, I felt two points of heat bore through my back. I slowed down further and tried to scratch my back, when I felt this insane need to turn around.

And turn around I did, only to find a man with long hair, clean shaven, stand there and stare at me. There was something very familiar about him, I struggled with memories in my hazy mind to try and place him. Until, I saw the scar that ran across his right brow.

“Wallace”, I whispered and dragged myself as fast as I could towards him. I needed to meet him, talk to him, look into his eyes. I needed to know what happened to my Rhea. He knew I had recognized him, he was sure I would. Even in my down trodden state, he knew a sliver of reason existed somewhere.

He looked at me and grinned. He then slowly pulled out a power puff girls handkerchief and threw it on the ground.

I knew that piece of cloth, I knew it! It belonged to my baby, my child, Rhea. He had her, he still had her. Which meant she was alive? My mind ran through a list of possibilities, each one of them, hoping that my lost girl was alive somewhere. She would be ten years old now. What could he have done with her? Kept her as his daughter? As a maid? Sold her to someone? Used her?

It did not matter now, my baby was still alive. All he had to do was tell me, where she was. I would bring her back, even from the depths of hell.

Oh thank god, I could have gone there and kissed him, given him everything that I had, thanked him profusely for keeping my little girl alive.

And as I tried running in my awkward gait across the road, Wallace turned around and walked away.

“No…..please. stop…..Rhea. Please tell me where she is….please!” He did not listen, his walk turned into a slow jog. Soon, he turned a corner and disappeared out of my sight.

I reached the spot where he had dropped the handkerchief; I picked up what belonged to my five year old girl. It still smelled of her, I fell to the ground and filled the cloth with my tears; tears that were no more in the “I don’t give a fuck” bucket.