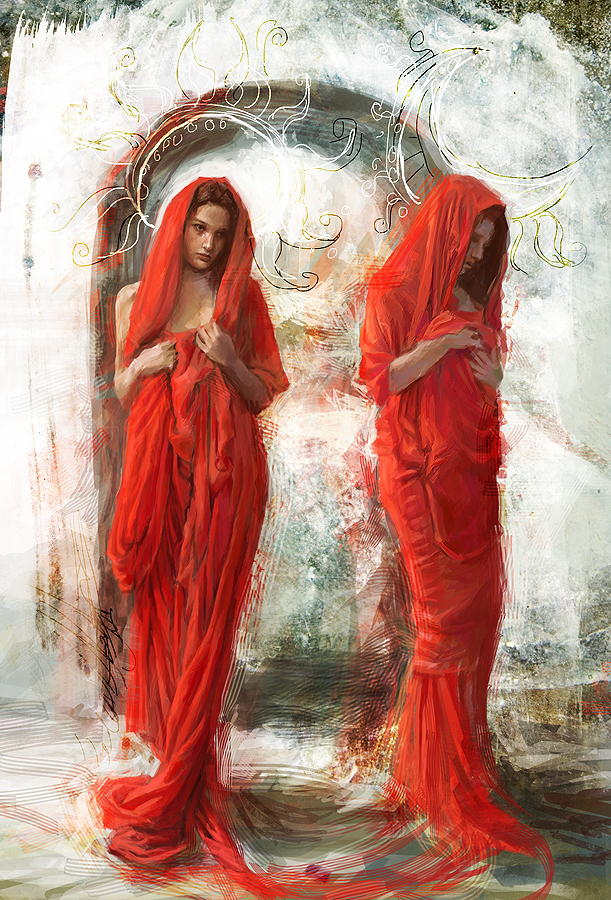 “Yes, agape mou this is our home now.”

The girls ran around the small home, which took not more than 10 steps to cover from one end to another. It was a stone house with low white ceilings and claustrophobic white walls. The only place divided was the bathroom with a cane door. The kitchen, bedroom and sitting area were seamless in this small home with no divisions.

Another entered through the door, a priestess with religious symbols tattooed all over her arms and a shaved head. She walked around ten steps and crossed the length of this tiny abode. She stopped right under the roof, where there was a small hole to stream sunlight through. She cocked her head towards the right, looked up at the roof, let the breeze from top wash over her shining and tattooed baldness and looked at the woman.

“This place is cursed!” she said.

“Cursed?! But we have to live here, there is no where else to go.” Said the woman, holding her two girls.

“I did not say that you have to move.” Said the priestess. “There is a restless spirit haunting this place, a spirit reduced to the stature of a rodent. We need to get rid of it.”

“How do we do that?” asked the woman, her voice shaky.

“We prepare for the ritual now, I have everything with me. I will need your help to set things up.”

They then set about to prepare for the ritual, and while I waited to for what comes next; I decided to look for the restless spirit. How difficult would it be to find a ghost in a house that can be covered in just ten long strides? I looked in the bathroom first, nothing, went to the kitchen area, nothing, went to where they started the ritual, nothing. Just then I noticed something move in the far corner of the kitchen. Away from light, shrouded in darkness; and there standing in the watering hole. I saw her.

She was nothing I imagined a ghost to be. Yet, she made my hair stand on its edges. Her wretched appearance, bones that jutted out of her shoulders reminded me of razor blades. She was covered in what looked like a filthy rag, with holes cut out to accommodate her bone thin arms. Her face was partially covered in strings of matted hair, and the rest was hollow cheeks, big white eyes, and razor sharp teeth. Her eyes were sunken and blood shot, there were angry red scratches that covered her white, dry face. Her lips were drawn in a snarl, and yes, she was looking right at me. She looked withered with her bones jutting everywhere, and the rest of her floating within the rags. Her hands were covered with wounds that were similar to bites. I realized, she truly was the rodent here, reduced to a pitiful state of nothingness

One thing became instantly clear, she did not belong, this house was now theirs, the woman and her two girls and she needed to go.

Yet, my heart beat faster at this abomination. The thought of that creature touching one of the girls with her grimy hands, appalled me.

I could hear the priestess chanting in the background, she had drawn strange religious symbols all over the walls and lit a fire in the center of the house. She believed that only with the combustion of fire and water; will the spirit leave this house.

As her voice grew louder, so did the fire become larger and thunder rolled outside.

The priestess came over to the watering hole to fill up the round vessel. I knew that when she does the final act of pouring water over fire, this horrible being would disappear, forever.

Shouldn’t I ask her, if she was ready to go? I looked back her, in her state of pathetic existence. For a moment I felt pity, but then I realized that the dead have no place here. This house was for the woman and her girls.

I gathered courage and asked her, “Are you ready to go?”

She spoke is raspy whisper, “I don’t know. “

“You don’t have a choice, you can’t be a part of this. You are over.” I reprimanded her.

I looked behind me, the priestess was poised with the vessel to pour water over fire and vanquish this ghost.

But wait, shouldn’t I ask her who she is, and how did she come to be?

I looked back at her and asked, “Who are you?”

And just as I finished my sentence, my entire being was lifted high up in the air, halfway through to the ceiling of that small house; I felt excruciating pain throughout my body, as if someone was trying to rip my very essence into shreds.

The priestess finally poured water on fire, and the ghost spoke, “I am you.”